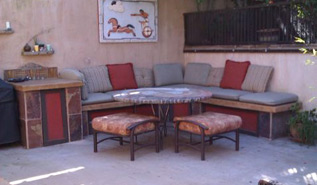 Read our tips, explore our product suggestions or just get informed on organization, going green, better use of space and more.  Let us help you change your view.

Go to Our Blog

Hurry, Don’t Ease on Down to the San Diego County Fair

Oh magical days of childlike wonder, there is nothing like a county Fair to bring you back.  Yesterday I eased on down the road to the Wizard of Oz themed San DIego County Fair with my friend. People and attractions and fair food, oh my!  It was a Monday so we encountered little traffic and a quick arrival time. We jumped on a tram from the overflow lot and the excitement began.

The first Pavillion we entered was the Tribute to Frank Baum/Wizard of Oz exhibit.  What an absolute delight! Oversized display boards told the history of Frank Baum, his Wizard of Oz series and everything you ever wanted to know about the making of the film.  Display cases housed a timeline of collectible paraphernalia. Vignettes for photo opportunities included, Auntie Em’s Farm, the Scarecrow’s post, the Tin Man’s Ax, the Angry Apple Orchard and  Glenda’s Bubble. By far the most fun was watching people’s faces light up as they took a little skip step onto the yellow brick road that was projected down the middle.

We followed the yellow brick road to Fair Food Central.  Enormous lighted signs and a giant inflatable ear of corn, live music in the air, smells and intriguing combinations-- bacon wrapped baklava, lemonade bombs-- lemonade with cotton candy, battered potatoes, fried pizza, giant pterodactyl (turkey) legs, fries with anything on them, funnel cakes, ice cream, candy and beer-- lured us through the entire thing like Augustus Gloop in Willie Wonka’s Factory.  Being a vegetarian, it was slim pickin’s, but this didn’t stop me from overindulging. I ate a bag of kettle corn and a regular lemonade; later some french fries with cheese sauce and grilled jalapeno and immediately wished I’d remembered antacid.

Like Dorothy in her poppy induced fog, we carried on in our fair food coma down the path to the Photographic Arts Building.  Wow! I was awake. So many photos, I hesitated to enter-- but then I was hypnotized by so many stunning, moving photos by students.  Next to the professional photographers display, I was fully under a spell.

Satisfied with our journey we excitedly hurried through the entrance to the Emerald City to “Get Down Tonight”  to the music of the Wizard: KC and the Sunshine Band. This band is a true music spectacle: 15 musicians-- 4 horns, 2 guitarists, 2 drummers, 2 keyboards, frontman/keyboards, KC,  and 4 foxy dancers. KC at 68 is still an amazing frontman, performing all of his classic moves and some new ones, despite his age and weight gain. He addressed both at the start by asking “What happened?” He stated his age and advised his 30 year younger counterpart, Justin Timberlake: “this is what you have to look forward to”.  He further joked that he considered changing his name to “KFC” and the Sunshine Band and he had contacted Marie Osmond to try out her diet. Later in the show he stopped dancing and yelled: “What’s your Grandpa doing tonight?”  Cheers were abound. No one cared that he was older or he had gained weight.  People yelled “Go KC!”, “We love you KC!”. He rocked 3 costume changes, kept up with the 4 dancers, played keyboards, belted out his songs as if he were 30 and had the crowd jumping for the entire show.   We enjoyed all the band’s hits-the funky, disco sounds of “Shake Your Booty”, “Boogie Shoes” “Keep It Comin' Love”, “Do Ya Wanna Party”, and ballad: “Don’t Go” . “That’s the Way” I like it! We weren’t in 2019 anymore and for this 50 something, there is no place like home in the music of the 70’s!

So hurry, don’t ease on down to the Wizard of Oz themed San Diego County Fair, there are only 2 more days; it closes with a bang on  July 4th.  I tap my ruby red slippers and murmur: “I only wish I had gone sooner in the season and sooner in the day so I could enjoy more, more, more.

There are no articles posted this month.